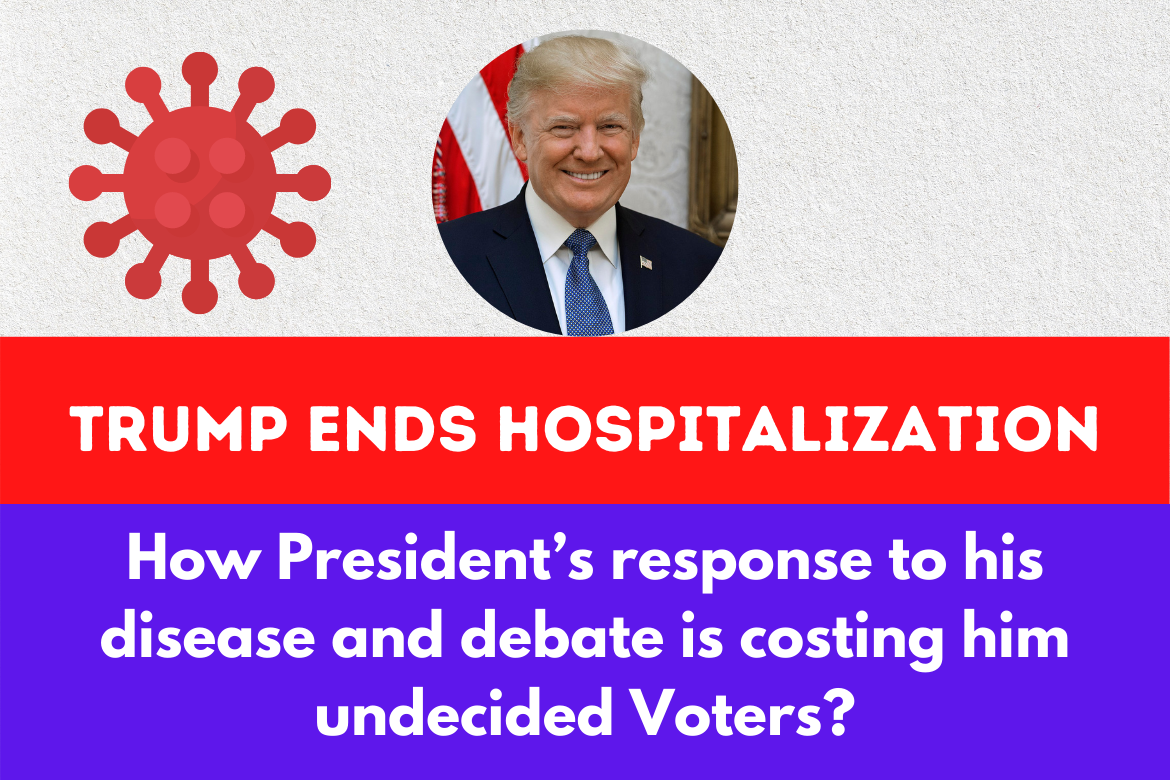 As American elections are less than a month away, the political campaigns are at their peak these days. After spending three days in the hospital, Donald Trump hospitalization ends prematurely as he returned back to the White House while removing the mask in front of the media to downplay the impact of the novel coronavirus.

Doctors, however, are not satisfied with his condition and said that he “is not out of the woods.” Trump hospitalization resulted in daunting the campaigns of Republicans as Trump announced he would dismiss all of his political rallies across the country.

Meanwhile, the president’s problems increased, as the latest polls show a massive lead of sixteen percentage points by Biden over Trump. While 57% of people sided with Biden, only 41% said they back Trump for the November elections.

Trump downplaying the Disease: A Reason for his nosedive in polls:

Since the inception of the coronavirus, Trump never took the disease seriously. From calling it a “Chinese virus” to prescribing drugs to the world without doctors’ consultation, he always took COVID just like another disease.

This was also seen in the public gatherings and news conferences where he appeared without any face mask. Not only this, but he also mocked the Democratic nominee, Joe Biden, continuously for wearing the masks at all times.

As he continued these practices, he caught the virus, which became the top news of the global media after the contested first presidential debate.

And now this event of Trump hospitalization and his premature attempt of attending the voters with virus is also showing his ignorance towards the disease.

Debate, COVID response and taxes: A nexus for the downfall of Trump:

The inclination of the swing voters towards Biden is mostly due to Trump’s continuous interruptions in the first presidential debate. Liberals and left-wing people are mostly tolerating and want to hear every opinion before making any choice.

That is the reason why undecided voters have started moving towards Biden amid the president’s continuous interruption when Biden talks. Not only this, Trump is COVID-affected now, a threat which he always considered a conspiracy.

His negligence is one of the main reasons why many people have started going to support Democrats in the race for the White House. Now, the premature end of Trump hospitalization can also shape public opinion against him.

To add fuel to the fire, Trump’s tax scandal is also pushing the undecided voters in favor of the Democrats.

During his stay in the hospital, the actions of the president after catching the virus seems irresponsible, considering he is an opinion leader of the masses and has a tendency to impress the masses. With more than 7.5 million COVID infections nationwide, this can be fatal not only for the president but also for the whole country.

Since Joe Biden tested negative for the virus, his campaign remains in full swing. Not only this, but he is also respecting COVID protocols, and is impressing people with his actions to win their trust. With such a significant lead, impressive actions, and the fast on-going campaign of Biden, he is highly expected to win the White House for the next four years. With more and more people catching COVID in recent days, many White House and government officials have also been tested positive.

These include first lady Melania Trump, three Republican senators, and Trump’s campaign manager. The origin of this White House COVID outbreak is expected to be in the nomination ceremony of Amy Coney Barrett on September 26 in the White House rose garden, where the social distancing mandate was not respected at all.

Trump suggested Americans “not to let it (COVID) dominate” their lives after downplaying the virus itself.

An Increasing trend of undecided voters towards Biden:

Undecided voters are bound to play a critical role in the 2020 elections to swear in the new president to the White House. To win these voters, the last month before the elections is extremely crucial, as even a little bit of negligence in this regard can result in losing voters in masses.

There is enough evidence that swing states will decide the direction of this election, which also increases the importance of recruiting swing voters. Reports are also coming that Biden is continuously winning the undecided voters, which is helping to make him the favorite for the November 2020 battle.

That was one of the reasons why Trump decided to see the Republican supporters in his car during his stay in the hospital.

How Trump could have avoided this nosedive? Will premature end of Trump hospitalization hurt him more?

As matter of fact, the president disobeyed COVID SOPs vehemently, and it cost him. However, despite getting COVID, he still could have won the sympathies of the undecided voters by respecting the opponent’s opinion in the first debate and following the proper fourteen days quarantine in the hospital.

Probably, many people would have understood his situation, had he played smart after getting COVID, yet his political mistakes are costing him time again and again, which is evident in the latest polls.

This premature end of Trump hospitalization is expected to cost him even more where more people will have a negative opinion for the president now.

If everything goes in favor of Trump, he is expected to get out of quarantine on October 15, just before the second presidential debate. However, the stakes are higher, and the future of debates is in doubt.

With Biden winning the first debate by a considerable margin, Trump can never afford to lose another debate, as it can increase the lead of Biden even further. In quarantine, the most he can do is to speed up his campaign online while respecting the COVID protocols; otherwise, losing the second debate will be the last thing that he can afford just before the elections.