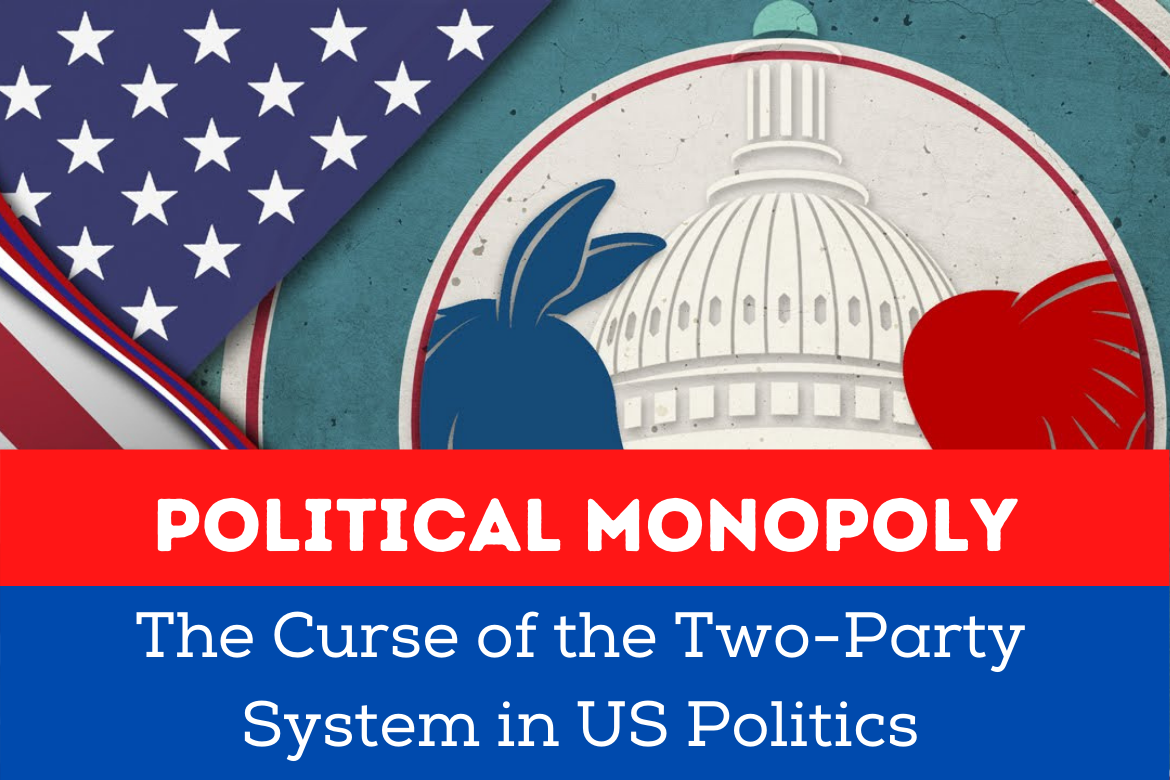 “There is nothing I dread So much, as a Division of the Republick into two great Parties, each arranged under its Leader, and concerting Measures in opposition to each other. This, in my humble Apprehension is to be dreaded as the greatest political Evil, under our Constitution.”

Suing big-tech companies these days is a major issue due to the monopolies they create. The interesting thing is that this action is being taken by the leaders who are serving the monopolies in American politics themselves.

The prevailing political system of the United States entertains two political parties, namely the Democrats and Republicans. This two party system in America effectively blocks swearing in a candidate from a third party to the highest office.

While independent candidates or third parties may have radical ideas to transform the country, realistically, only a Republican or Democrat can be elected to the office of the president of the United States.

Even if we see beyond the presidential elections, very few independents get elected to Congress. This is due to the fact that Democrats and Republicans give the notion to the Americans that only they can solve their problem, which is not true at all.

While many candidates run for the presidency, only a Democratic or Republican nominee gets media attention, as most people don’t even know the names of the other candidates.

This is also evident in that the Commission of the Presidential Debate (CPD) only invites Republican and Democratic nominees for the debates, kicking the independent candidates out of the race even before the election.

This results in killing the potential of leaders who aspire to become politicians but cannot join any of the two parties due to the limited opportunities and systematic hurdles.

Another big problem is that the major political parties in American politics don’t focus on nano and specific problems. They are often alienated from the issues of the average Americans, resulting in worsening the lives of the masses.

To move towards the progressive era, it is an absolute necessity that we start thinking beyond the two party system in America, as only then will the real problems of the masses be addressed.

What are the problems associated with the two party system in America? How can Americans see the dawn of a progressive era with the help of third-party and independent candidates? Let’s have a look. Is a Two Party System in America the Answer of Modern Times? Certainly Not.

There is a common notion that the two party system in America promotes centrism while discouraging extremism. Centrists believe in moderate views, without tilting to one specific side of the political opinion. The propagators of this system often opine that it is easier to choose between two competing ideologies available.

However, the multi-party system provides a multi-faceted approach to solve any problem. More viewpoints on any problem will lead to more potential solutions.

Similarly, democracy is often associated with a multi-party system, as the two party system in America may not necessarily represent every section of society.

The multi-party system leads to a better centralization of policy matters. The presence of different ideologies while crafting the policies helps analyze the impacts of every single step better.

The fact of the matter is that anyone not knowledgeable enough about the real-life problems of people is bound to not serve them.

The pervasive red-tape in the United States bureaucratic system leaves the elected nominee alienated from the common man’s issues.

Only a vibrant independent or third-party candidate can make these political giants worry, as introducing more independents will make them ultimately focusing more on politics.

The divergence of political attitude to the ideological extreme is omnipresent in a two party system in America.

This political polarization is vibrant in the current system of the United States.

And party leaders capitalize on this thing. They know that citizens have limited options to vote. For these reasons, they are establishing their monopoly on politics and acting as a resistance to the impact of others.

Despite having a weak profile and a lot of lawsuits nominations in the past, these so-called party leaders managed to reach the top positions.

These facts decry that the political monopolies are capitalizing on the weakness of the system. They know that they are not serving the best interests of the United States. Still, they are not following the right path, as they know that people have no other choice.

This political polarization is also responsible for the deep divide in the country where Republicans blame Democrats for the destruction of the country, and vice versa.

Supporters of both parties go to extremes while discussing politics. The hate-drive by this political polarization is unprecedented, which can easily be seen on social media platforms.

While on the one hand, the Republicans perceive Donald Trump as God, and on the other, the Democrats are not able to see beyond Biden.

Amid all of this, breaking the polarization is the only way out, as suggested by the founding father, John Adams.

Ian Shapiro, a political science professor, examined the political polarization of American politics in his book Responsible Parties: Saving Democracy from Itself.

Shapiro argued that the last four years were the most damaging in United States history due to the current political system.

The Sterling Professor of Political Science at Yale University said that it is now an established truth that Donald Trump did a lot of damage to the country in the last four years. Yet we should not forget that Trump is a product of the United States political institutions, and his inflicted damage is to serve the purposes of the same institution.

Monopoly kills creativity and crashes a lot of talent inside it. Shockingly, these same politicians will sue the business organizations for monopolizing the markets, but they are serving the monopolies in politics themselves. How the Two Party System in USA Failed: A Need for Independent Candidates:

Representative democracy depends on political party organizers for most of the work. They are relevant for mobilizing voters to win votes for their political bosses. Once a candidate wins the election, all the power is vested by him, and no one gets exemption from his authoritative policies.

This is the reason why the founding fathers were worried about the political parties. So, they tried to keep them out of the monopolistic political spectrum but failed to do so.

Political parties of the United States have failed in two respects. First, these political parties no longer select candidates. This is mostly done by a few prominent members who decide and then force their decision on the supporters.

For instance, consider the following things.

The politics of the United States is based on a two party system, where both parties dominate Congress and are responsible for running the country’s affairs.

This two party system in America encourages the authoritative leadership style and, in no way,  represents Democracy.

Ideas, creativity, and intelligence get buried under this orchestrated system, which serves all the purposes other than serving Americans.

It is in dire need that we introduce independent candidates and a third party in US politics to crash the monopolies of the existing giants who are exploiting people as much as they could.