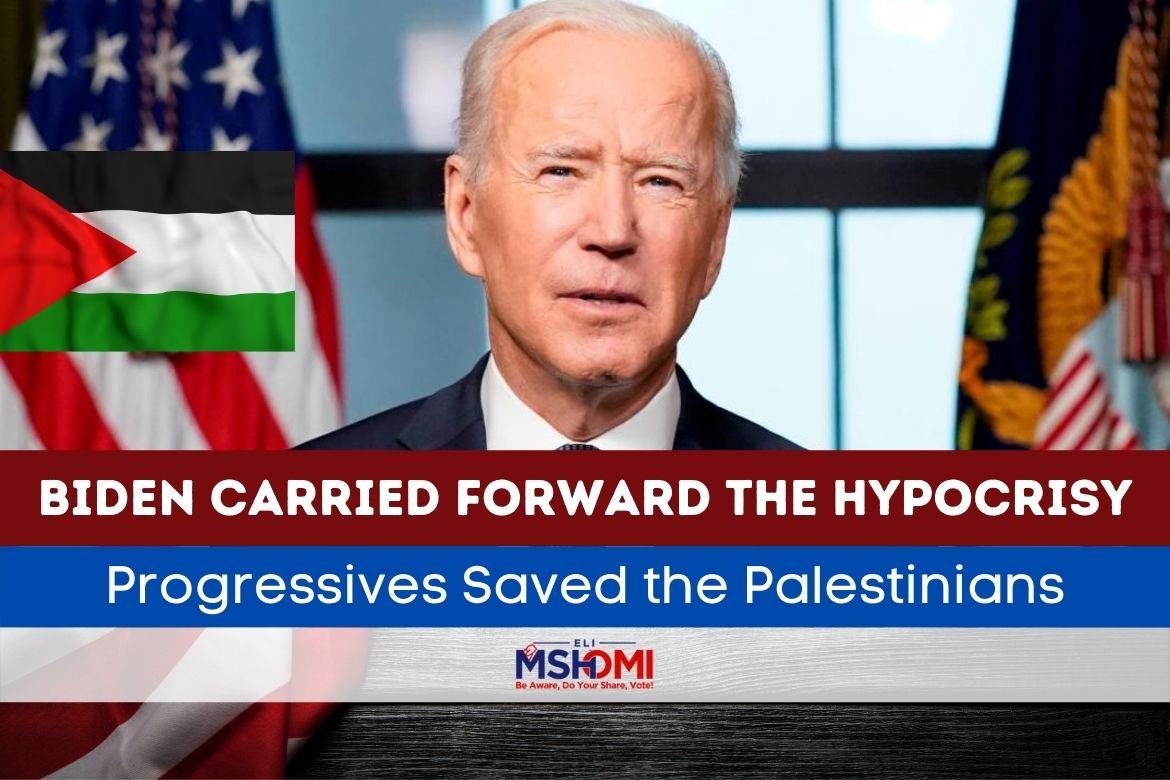 Amid the relentless bombardment of the Gaza strip by the Israeli military, Biden’s call for the truce has finally been entertained by the Israeli security cabinet after ignoring it initially.

The burden of innocent lives lies on the shoulders of President Biden, who could have averted the massacre earlier by stopping Israel in the initial stages.

As a United States president, if his words matter this much, in the US and Israeli relations, that a single telephonic call can put the violence to a halt, he was responsible for exercising this as the priority.

The earlier stance of Joe Biden and Kamala Harris about the right of Israel to defend itself, without mentioning the importance of innocent lives, needed not to be portrayed at any cost.

It encouraged Israel to further its genocidal efforts against the people of the Gaza strip.

Now, as the situation stands, Biden should announce aid to rebuild the demolished infrastructure in the Gaza strip so that life can come back to normal.

Not only this, but the president also needs to look into the illegal expansionist policies of Israel that are forcing evictions of Palestinians in the region.

The United States often supports Israel, primarily due to vested interests. Be it the US taxpayer money going to Israel in the form of $38 billion of military aid or the US help to make Israel a nuclear country, the unconditional support is omnipresent, which depicts the economic priorities of the US.

As Netanyahu’s cabinet finally decided not to bomb Gaza anymore, after killing 232 Palestinians, including 65 children and 39 women, the Biden administration’s responsibility lies in solving this everlasting crisis once and for all.

Many suggest that Donald Trump’s unconditional support to Israel has even worsened the situation. The other day, Donald Trump Jr. posted a video defending Israeli airstrikes on the tower housing Aljazeera and AP offices. Progressives: The Light at the End of the Tunnel Amid Pervasive Hypocrisy

Voices, mainly from the progressives, were being raised from the US Congress for bringing Israel to justice.

Whether it is Rashida Tlaib, who cried while reading a Palestinian mother’s tweet, or Bernie Sanders, who wants to stop the US $735 million arms sale to Israel, only progressives mounted pressure on Biden.

The same Joe Biden is yet to take a practical measure to reverse any of Trump’s policies. The US and Israeli relations are probably more potent than any government; that’s why the subsequent US governments never took the commendable initiative to silence Israeli missiles against innocent Palestinians.

This narrative is also portrayed by John Mearsheimer and Stephan Walt in their book The Israel Lobby and US Foreign Policy, who suggested there is a “loose coalition of individuals and organizations who actively work to steer US foreign policy in a pro-Israel direction.”

But it is imperative to mention that this pro-Israel policy must not come at the expense of Palestinian lives and, obviously, their land. US And Israel: A Power Bloc in the Middle East is Endangering Humanity

The United States’ support for Israel is also a part of the complex Middle East politics, where Israel is the right hand of the US to contain Iranian activities in the region. Going against Israel would ease the suffering of Iran, which the United States would never want.

Nonetheless, this balance of power in the Middle East must not drive the humanitarian crisis in the region.

As the UN Secretary-General said that Gaza is the living hell for the children, the Biden administration needs to recalibrate the US and Israel relations.

After taking charge, Anthony Blinken reiterated Biden’s foreign policy that the humanitarian issues would be of utmost urgency for the United States.

However, the silence of the Biden administration in the prevailing crisis opines that humanitarianism is just the cover under which Biden wants to draft the US foreign policy in favor of Israel, to further strengthen US and Israel relations.

These human rights, for the USA, are the product of the social construction where the Biden-Harris administration can sanction China and Saudi Arabia for violating human rights, but not Israel.

The same was the case with the Trump-Pence administration, who criticized Chinese human rights designs but promoted arms sales to Saudi Arabia and extended unprecedented support to Israel for better US and Israeli relations, which encouraged them to expand their settlements in Palestine.

Seeing this pattern, the US foreign policy direction deduces some results. First of all, human rights are just the cover under which different administrations promote their policy, which is supposed to be advanced anyway.

Human rights are being compromised as far as it drives the economic engine of the country.

The u-turn of the politicians makes the matter even worse.  Biden, who labeled Trump’s decision to move the Israeli embassy from Tel Aviv to Jerusalem as “short-sighted and frivolous,” does not intend to move the embassy back to Tel Aviv.

The point here is simple, which President Biden needs to understand. If it’s frivolous, move it back. But if he is not moving it back to Tel Aviv, it means that all the statements were political, only to gain more liberal voters on his side.

This is the same approach Biden used when he buttered up the people of color, and, after winning the presidency, he is no longer an advocate of all the causes he sponsored earlier.

The credit for the ceasefire goes not to Biden but to the progressives, including AOC, Ilhan Omar, Rashida Tlaib, and Bernie Sanders, who raised their voices against the persisting Israeli oppression.

Had they left the matter for Biden, the violence was going to continue longer, resulting in further deaths.

It is due to the same people that the administration, which prohibited the United Nations from giving a statement against Israel, has now enforced a truce in the war-torn region.

Moving forward, diplomacy needs to work in full flow, and no excuse for perpetuating the humanitarian crisis in the state of Palestine should be encouraged or tolerated at any cost.