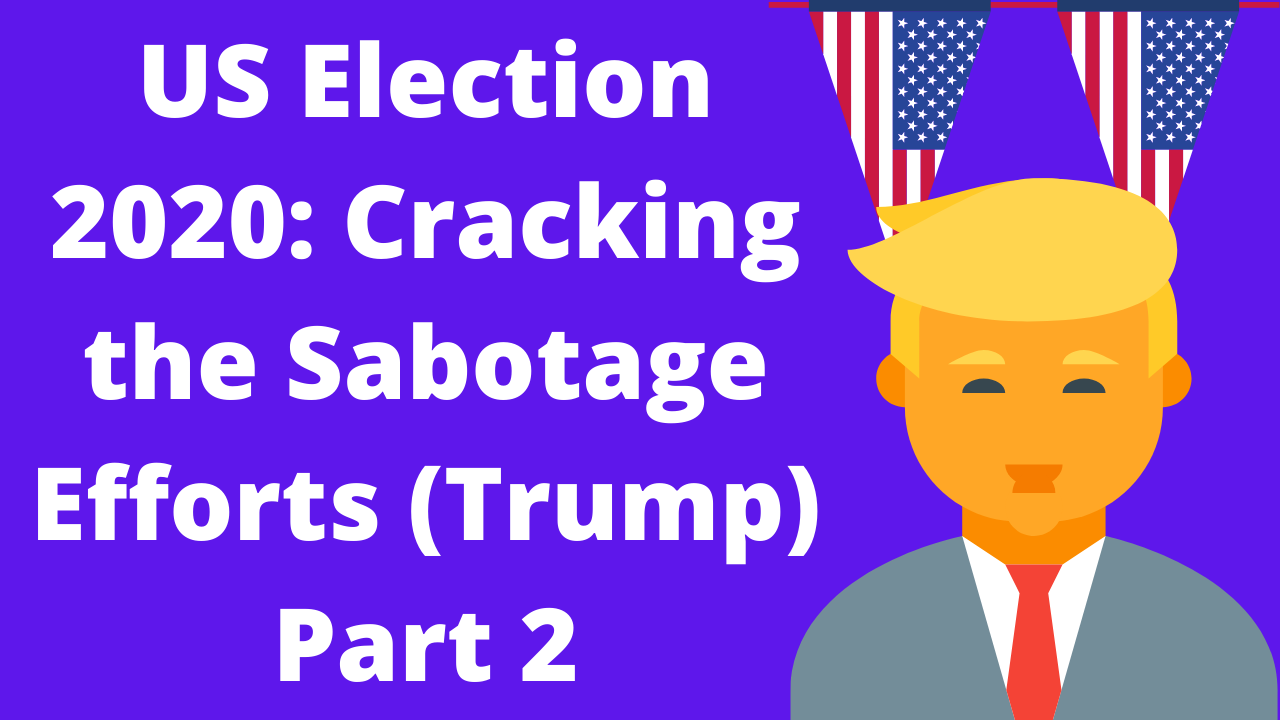 President Donald Trump is refusing to fund the USPS. But why? Here is the discussion of US Election 2020 and President Trump’s sabotage.

Why and how President Trump is trying to sabotage the election? November is coming closer, and with each passing day, the statistics of President Trump’s possibility of winning are going down.

On the latest poll released last Tuesday, Trump had 41 percent support from the masses.

On the contrary, his opponent, Joe Biden, had 51 percent support, leading Trump by ten percentage points. Although it wasn’t obvious at first, President Trump has been trying to bring down the election relentlessly.

Nasty Attempts of President Trump to US Election 2020

Among all the different ways President Trump has attempted to sabotage the election, starting from taking aid from Russia to ensure his victory to forcing the president of Ukraine to taint Joe Biden’s name in the past year, his brand new target to sabotage the presidential election is the USPS. He has been accusing the USPS of poor management and doubted the agency’s ability to manage the mail-in ballots in the upcoming Presidential Election.

Concerning the poll results, among the voters who supported Trump, only 35 percent say that they will definitely vote for Trump when asked directly.

At the same time, 39 percent of the Biden supporters say that they will certainly vote for the former vice-president Joe Biden.

There are a plethora of reasons as to why President Trump has been losing public support.

However, he wasn’t exactly a popular leader before. This increasingly made Trump anxious over the election results, and he resorted to underhanded tricks to manipulate the election.

The year 2020 was already a highly anticipated year for the country because of the United States presidential election, but the unprecedented wave of coronavirus pandemic has shaken the world to the core. And the United States is no different.

Rather, the country has been the worst victim of the pandemic, with over 175,000 deaths and over five million confirmed cases. Voting in person hardly seems possible in this scenario.

This is where the USPS comes in. The USPS delivers paper ballots to the registered voters who request a vote by mail option from the election agency. And President Trump’s worst fear is that if the voters don’t participate in person to cast a vote, he will lose the election. This led him to point his finger at the USPS with groundless accusations.

President Trump has recently stood against the decision to fund $25 billion to the USPS to help with the election. As reasons, he claimed that the mail-in votes increase the risk of fraud and that the USPS would not be able to handle the surge of mail votes in this election.

Additionally, he believes that it is possible for the common public to vote in person, even as the number of affected people is increasing every day.

This year, a large number of voters will cast their votes by mail due to the ongoing pandemic not allowing people to go out and gather in public places.

This may not be much of a challenge, as the USPS currently handles a massive number of almost five hundred million pieces of mail per day.

Millions of voters are expected to cast their votes through the mail, and the USPS will be handling all the paper ballots, sending them to the election agency where the ballots will be sorted.

This vote by mail has been going on long before the pandemic. To date, only twelve votes out of the hundreds of millions were detected as fraudulent.

In May, Louis DeJoywasappointed as the new Postmaster-General.

For people who don’t know why this person is relevant to this fiasco, Louis DeJoy is a noted supporter and one of the major fundraisers for Trump’s victory campaign. He has accumulated a total of $1.3 million for his election campaign. So, after his appointment, he has made some changes to the USPS policy and management.

As per the new policy, the USPS has taken some new initiatives, halted overtime working for the staff, and increased the delivery cost temporarily.

Also, 671 automated sorting machines have been removed to reduce operating costs. The reason for removing the machines was shown that they were now obsolete, and also linked to the decreasing mail volumes.

A lot of people were complaining about late deliveries. And a total of twenty states were preparing to sue the USPS.

Two separate lawsuits were being prepared. Seeing the lawsuits, DeJoy immediately halted the changes until the end of the election is over.

Concerning the accusations of fraud that President Trump made toward the Democrats and the USPS, although vote fraud is extremely rare, out of all the occasions fraud was detected, it was always a Republican.

Democrats are asking for funding for the USPS to run the election smoothly because the USPS delivery will enable all the voters to cast their votes through the mails upon request.

Clearly, the USPS’s participation in delivering paper ballots will further ensure a just election rather than a rigged one, which is what President Trump fears.

Not just attempting to manipulate the election, President Trump’s incompetence in handling a pandemic is worsening his possibility of winning this election.

When he should be implementing a nationwide rule to wear a mask mandatory and taking necessary measures to contain the virus, he is refusing to wear a mask in public and taking a rather nasty approach to win the election.

His callous attitude toward a global emergency has put millions of Americans’ lives at risk.

Yet he is overlooking the virus and focusing on the election, even that in the wrong way.

He is using the coronavirus to his favor as a means to sabotage the election and scare away the voters. On the contrary, while his belief that this strategy will bring more votes to his ballot box, quite the opposite is happening in reality.

In reality, blind Trump supporters are waking up to the crumbling economy and deteriorating the livelihoods of the people around the country.

He is losing support with each passing day; that is obvious in the national polls. President Trump has also slowly realized the fact, and now, he is trying to float the idea of delaying the election.

To our surprise, the Senate majority leader, Mitch McConnell, a trusted Trump follower, has dismissed the possibility.

As it is obvious that Trump has taken many wrong turns during the past four years of his stay in the White House, it seems sabotaging the election will bring him the victory he wants.

Despite his continuous attempts, it is the voters on whom it depends on whether or not his attempts will sabotage the US election 2020. Even though the USPS has been running on a deficit for years, it is quite certain that no mistakes will be made from their part.

Not to mention, Trump’s try-hard campaign against a vote by mail can also backfire. Voters around the country should definitely take this chance to make things right for the country once again by practicing their civil right to vote. Only this way can the people turn things around for America.