US Innovation and Competition Act: Now or Never Opportunity for the US for Technological Domination 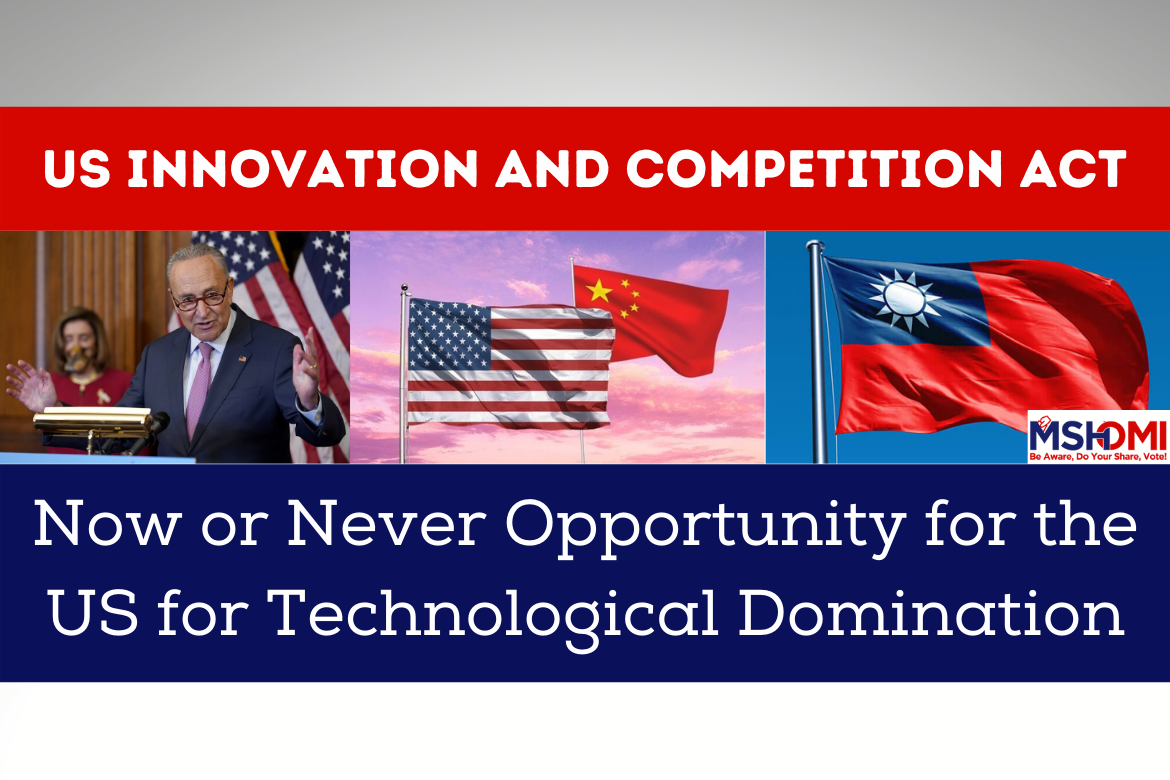 This makes US lawmakers aware of the need to enact legislation that has long been ignored to counter adversaries like China, which have gained significant ground in the field of technology.

Therefore, the introduction of the  US Innovation and Competition Act (USICA) would serve the purpose of saving the US technological interests in the world. US and China are in tough technological competition with China pouring more investment in the sector. This pushes the US at the back foot.

United States Innovation and Competition Act: A Gateway to Save the US Technological Interest Globally

The United States Innovation and Competition Act (USICA) sent a very significant message to the competitors that even with a deeply divided Congress, this country is still strong enough to challenge those who are looking forward to outpacing the United States from the emerging fields of science and innovation.

However, the scale of the $250 billion investment is still a drop in the bucket compared to the investment China is pouring into the field.

It seems that the US is not trying to compete with China in technological advancement, but rather trying to be the better version of its own self by making a shift from propelled decades of innovations in fields such as interconnectivity, academic research, government grants, and venture capital.

This act will empower and strengthen the National Science Foundation (NSF) to award grants to research the targeted strategic technologies.

The experts have shown strong confidence that even if the act does not seem to be producing immediate results, it will still be effective in the long term to out-innovate China’s military-civil fusion of technological innovation.

The most significant result that could come out under this new strategy is that USICA will restrict scholars having close ties with certain foreign talent programs from participating in government-sponsored programs.

This will ultimately safeguard the US interests from getting hacked by China, a country famous for perpetrating cybercrimes.

China has often been found guilty of intellectual property theft, where Chinese authorities have been using research and sensitive data to determine their national security and economic policies.

The USICA will prevent such mishaps in the future by providing researchers and scholars with an opportunity to build their careers inside the US. As a result, they will not feel the need to move outside or outsource their services to the competitors.

This is the most crucial step the US takes to limit China’s ability to exploit the transparency of US research and use it for China’s strategic advantage.

An effective security strategy requires a close relationship between national security experts and academic communities, and USICA will guarantee such collaboration.

Nevertheless, some members of research communities have also shown concerns about limiting the scientific collaboration with international partners. United States Innovation and Competition Act once in a life time opportunity for the US as suggested by Chuck Schumer. America can bridge the gap to compete with China.

Technological development: It’s Now or Never for the US

Senate Majority Leader Chuck Schumer called the USICA a “once in a generation investment” that would open new doors of technological investment in the United States.

A significant portion of the bill will be spent on the expansion of the strategic sector of the Federal Government, as it plays an important role in national security. This spending will include the semiconductor industry and mobile broadband using various mechanisms of increased research and development funding.

The Produce Semiconductors (CHIPS) Act is also a part of USICA, with an allocated budget of $52 billion. These funds will be directed towards incentive programs to produce semiconductors in the United States.

The bill also contains several provisions to facilitate higher education in the country. A considerable amount was allocated for the National Directorate of Technology; however, much of these funds were later diverted to education programs.

Interestingly, the United States Innovation and Competition Act also include certain regulations that describe a new trade policy meant to compete with China in the technological market.

This includes sections such as Buy America, Supply Chain Resiliency, and the American Security Drone Act of 2021. Taiwan is leading the global semiconductor industry, and with China-Taiwan conflict, the US has much to worry as a bit of disruption will push the US on the brink of seizure.

Dominating the Semiconductor Industry will Help the US Rule the World

Currently, Taiwan is the unmatched leader of the global semiconductor industry, and Chinese ambitions regarding the island are not noble. This drives the US to decrease its dependence on Taiwan in the semiconductor sector.

The production of semiconductors in America will by far be the most attractive achievement of this legislation.

In the past two decades, China has been outpacing the semiconductor industry but was lacking certain incentives needed to take this industry towards new heights. For example, China lacked in the area of design and manufacture.

The semiconductor industry produces nearly $400 billion in revenue per annum, and the United States has long ignored the fact that investment in this field could prove to be a significant factor to the economy.

USICA may not have allocated enough funding to compete with China in technological advancement and investment, but the CHIPS Act, a section of USICA, could prove a game-changer creating a huge space for the US in the semiconductor industry.

The lack of funding reflects the greatest challenge in the counterintelligence and security space of the United States.

Spending for the United States Innovation and Competition Act will fill up the gaps that were created by decades of ignorance.

However, without allocating dedicated funding toward these initiatives, the impact will be minimal due to insufficient resources.

The government needs to increase the spending in this sector for the long-term impact and also for immediate results, as competitors are moving at a fast pace in the field, and it may get too late for the US to regain its place.

US – Iran Upcoming Nuclear Talks: Israel is Ready to Play with Fire