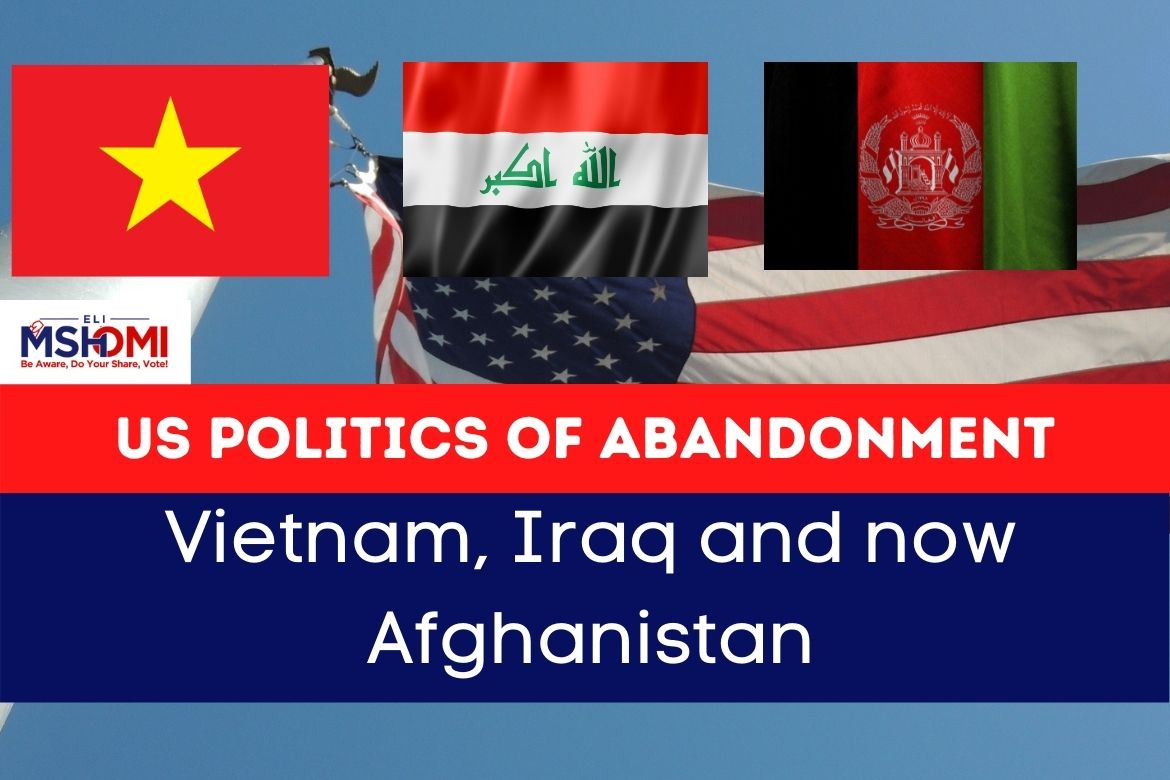 The word “abandon” itself seems a dishonorable word in the jargon of war, like soldiers returning from the battlefield defeated.

But the US politics of abandonment is a truth.

In its 250 years of history, the United States has left the battlefield numerous times and withdrew its resources hastily, signifying the pervasiveness of politics of abandonment in the power corridors of Washington.

Take the example of the 1975 Vietnam war or the 2004 Iraq abandonment, for instance. The unformulated withdrawal has always brought great disaster to the place the United States left.

The same is happening in Afghanistan right now, with the US withdrawing its forces out of Afghanistan to end its forever war.

With a small number of US army personnel stationed in the South Asian nation now to protect the US embassy in Kabul, the military advances by the Afghan Taliban are now more than ever.

The Taliban has taken over major border crossings of Afghanistan and cutting off the country from its neighbors.

The politics of abandonment also yielded disastrous results for the US. Let’s see how these politics played out in the past, and how they could unfold in the near future. US Abandonment of Vietnam and Iraq Resulted in Turmoil

In Vietnam, the United States fought for over twenty years to stop the spread of communism in the country.

After losing around 58,000 veterans and spending $127 billion during that time, the US came at a stalemate, hence, leaving the war abandoned.

And ultimately, Vietnam became the “Socialist Republic of Vietnam,” signifying the victory of the USSR on this cold war battlefield.

That war had adverse effects on the economy of the United States. Unable to bear the economic strain being introduced by the war, President Johnson increased inflation to an unimaginable level.

The oil prices skyrocketed, reaching the highest price of the decade. Due to this price hike, the global economy faced a nosedive just because of the US involvement in the Vietnam war.

And despite disastrous financial impacts and the loss of thousands of gallant soldiers, the US ended up embracing the politics of abandonment, leaving Vietnam hastily.

Events unfolded along the same lines in Iraq. First, the United States supported Saddam Hussain unconditionally in the 1980s to curb the rising Iranian ambitions.

However, later on, the United States overthrow the government of the same Saddam Hussain in a preemptive invasion, ending up supporting his death sentence.

As a result of the invasion, insurgents like Al Qaeda and Daesh/ISIS were established in the Middle East.

The US once again embraced the politics of abandonment, leaving the country of Iraq in 2011 in an utter state of disarray turmoil. US Politics of Abandonment Playing out for the Second Time in Afghanistan:

Walking along the same path in Afghanistan, now it seems that abandonment is a permanent part of US foreign policy.

This is not the first time that the US would leave Afghanistan abandoned. In the Afghan war of the 1980s, the United States heavily funded the fighters to fight the Communist army of the USSR to stop the spread of communism.

However, when the Soviet Union left Afghanistan facing a sweeping defeat, the United States left the country, leaving the funded fighters behind.

These funded fighters, now known as the Taliban, are the primary foe of the US in Afghanistan these days.

The politics of abandonment in 1989 by the United States in Afghanistan empowered the Taliban so much that the same forces planned 9/11 from the terror pads in Afghanistan.

After 20 years of bloody war, the United States government has decided to completely quit Afghanistan under the “Doha Treaty” signed between the US and Taliban.

Joe Biden started his political career by opposing the war in Vietnam and is now ready to face the post-withdrawal stigma of the Afghanistan war.

Biden has reiterated that Afghanistan would not be the next Vietnam, and the Taliban is vowing not to use the Afghan land to orchestrate any foreign attack.

However, there is a consensus among the key stakeholders that the Taliban is neither a trustworthy group nor is an internationally accepted government, so it is prone to break treaties at any point in time.

In a recent media briefing, president Joe Biden said that for 75,000 Taliban fighters, the US had built a 300,000 person well-equipped and well-trained Afghan army, but this army is unable to stop Taliban advances. Some of them are even joining the ranks of the Taliban, seeing the changing power dynamics in the region. Will this withdrawal of the United States from the troubled territory be the last one, or can the US invade the region once again in case of any violation?

Turkey has also presented itself to protect Kabul airport from the Taliban insurgency post-US withdrawal.

Will the country stands by its promise, or would it backstab once the Taliban further their insurgency?

These are some unanswered questions, the answers of which can only be found as the events unfold anytime soon.