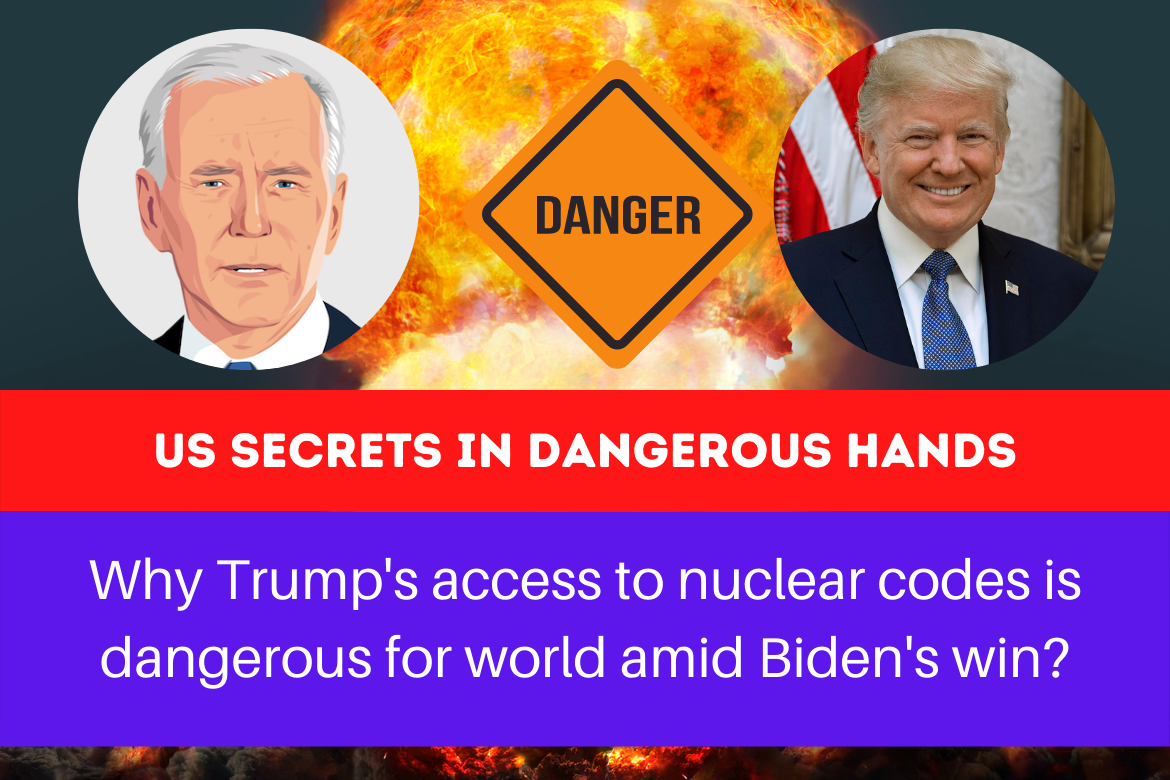 An outright refusal of a sitting president to concede is in no way a good scenario. Such practices are a threat to not only democracy but, in the case of the United States, the whole world. President Donald Trump, having all the US secrets in hand, is still considering the option to maintain his rule in the United States.

Presidential transitions are a difficult job even in normal times, but a time like now, given what America is going through, becomes worse. President-elect Joe Biden has attained a count of 290 electoral votes, and the count is still on-going.

Just like any commander-in-chief of the United States, Trump has access to all the US secrets. There are extraordinary challenges of economic collapse, a global pandemic, national uprising over racial discrimination, and a President with sole authority over nuclear weapons in his hand, refusing to concede.

President Trump is well-known for going to lengths to attain what he desires, and right now, his desire is another term in the White House, and also to establish an autocratic rule in the United States. In such a scenario, it is a matter of utmost importance that the presidential transition is carried out as soon as possible.

In this article, we will discuss Trump’s access to nuclear codes and election results while arguing that the Presidential transition should take place smoothly and as soon as possible. US Secrets: What is the Nuclear Football

Back in 2016, when President Trump won the electoral college votes and became the President of the United States, he was given a briefcase by a military aide. That briefcase is known as “nuclear football.”

That bag contained one of the topmost US secrets and confidential information about how to activate nuclear weapons using nuclear codes. From that movement up until now, President Trump holds the sole responsibility for nuclear attacks, potentially resulting in the death of millions of people in a matter of minutes. US Secrets: Who is involved in the nuclear chain of command?

Being the president and Commander-in-Chief of military forces, the President of the United States is the sole authority to launch a nuclear weapon.

However, the chain of command consists of other senior figures, including the US Secretary of Defense, Military Advisor, Strategic Command, and the vice president of the country.

Under the New START treaty, the US currently holds eight hundred nuclear launchers which can carry almost 1550 nuclear warheads, out of which four hundred are land-based intercontinental ballistic warheads. Before launching a nuclear weapon, the president discusses the matter with the Military Advisor, Secretary of Defense, and vice president.

The command is then given to Strategic Command, and within thirty minutes, the nuclear weapon is launched. However, the president may skip the discussion and give the command on his sole authority.

The US Secrets and the Sanity of the President

Nuclear weapons information is probably one of the biggest US secrets. Being a sole authority over the launch of nuclear weapons, the sanity of a president is a question of significant importance. If the president gives the order to the Secretary of Defense, the Constitution requires him to carry out the order.

If the Secretary refuses to obey, as he has reasons to doubt the sanity of the President, his act will be classified as mutiny, and the task will be assigned to the Deputy Secretary.

However, under the 25th amendment, a vice president could declare the president to be insane and incapable of taking out such action but will need a majority of the cabinet on his side. Trump’s access to nuclear codes will endanger the Global peace

In 2016, when President Trump was given the sole authority of the nuclear codes, he presented himself as the last person on earth to use nuclear weapons. Still, the intelligence community and Congress consider the sole authority in his hand as a threat.

In 2017, the Former Director of National Intelligence, James Clappers, said that he believes that Trump’s access to nuclear codes is a threat to the world.

This opinion came after several White House controversies regarding consideration of military options for North Korea and Venezuela.

President Trump threatened Kim Jong of North Korea with “fire and fury like the world has never seen,” which pushed Representative Ted Lieu and Senator Edward J. Markey to sponsor legislation that would prevent any United States President from using nuclear weapons without a declaration of war by Congress.

The deteriorating mental State of incumbent President and the US Secrets

There have always been concerns about the mental state of President Donald Trump. Multiple times the president was heard saying things that are not true, which results in the people close to him wondering how his mind works.

In 2018, a videotape emerged in which the president was found explaining his preferred methods of sexual assault. Psychologists often say that the president is not able to take the stress, and when he faces a tough condition, he shows abnormal behavior.

Trump’s attempt to reject the result and declare himself as the winner with only 217 electoral votes shows that the president creates his own reality and believes in it. The sole authority for US secrets and the nuclear codes is not a good thing for the United States and the rest of the world.

The president has been out of the scene after the poll result of Pennsylvania came out. People close to the president have not even heard from him.

On MSNBC’s The Eleventh Hour, the White House Bureau Chief of the Washington Post, Philip Rucker, said that the president has been contacting his allies. “He has been calling friends, advisors, allies, in search of good news,” Pucker said.

He also added that the president is considering running for re-election in 2024. The mental state of President Trump is creating tension among politicians as well as other institutions. Anything can be expected from a man with a mental state like that of the current president. Anything is possible for him, and he will not hesitate to consider the option of waging a nuclear war to protect his presidency.

After the confirmation of Biden’s victory, President Trump has been busy making the election result controversial, along with making some high-profile changes in administration. Lisa Gordon-Hagerty, the administrator of the National Nuclear Security Administration, was asked to resign from her post.

Similarly, John Barsa replaced Bonnie Glick, Deputy Administrator of the United States Agency for International Development, and Neil Chatterjee was replaced as the Chairman of the Federal Energy Regulatory Commission.

The Trump administration has not given any substantial reasons behind these changes, yet it looks like President Trump is planning something, which does not look good.

The Republican Senator Jim Inhofe, who is the chairman of the Senate Armed Service Committee, said that the resignation of Gordon-Hagerty was demanded by the Energy Secretary. He also added that such steps amid the presidential elections are not good for national security matters.

When the Biden administration takes over in 2021, the president-elect will inherit several problems, along with a former President entrusted with the matters of the US secrets especially national security and access to nuclear weapons in the past, who continues to be involved in politics.

This is just one of the dangers which the US is facing in the last days of Trump in the White House.

Therefore, the different sectors in the Congress and the so-called deep states should try to negotiate with President Trump for a peaceful and smooth transition in power to keep the US secrets safe, which is in the best interest of the United States.