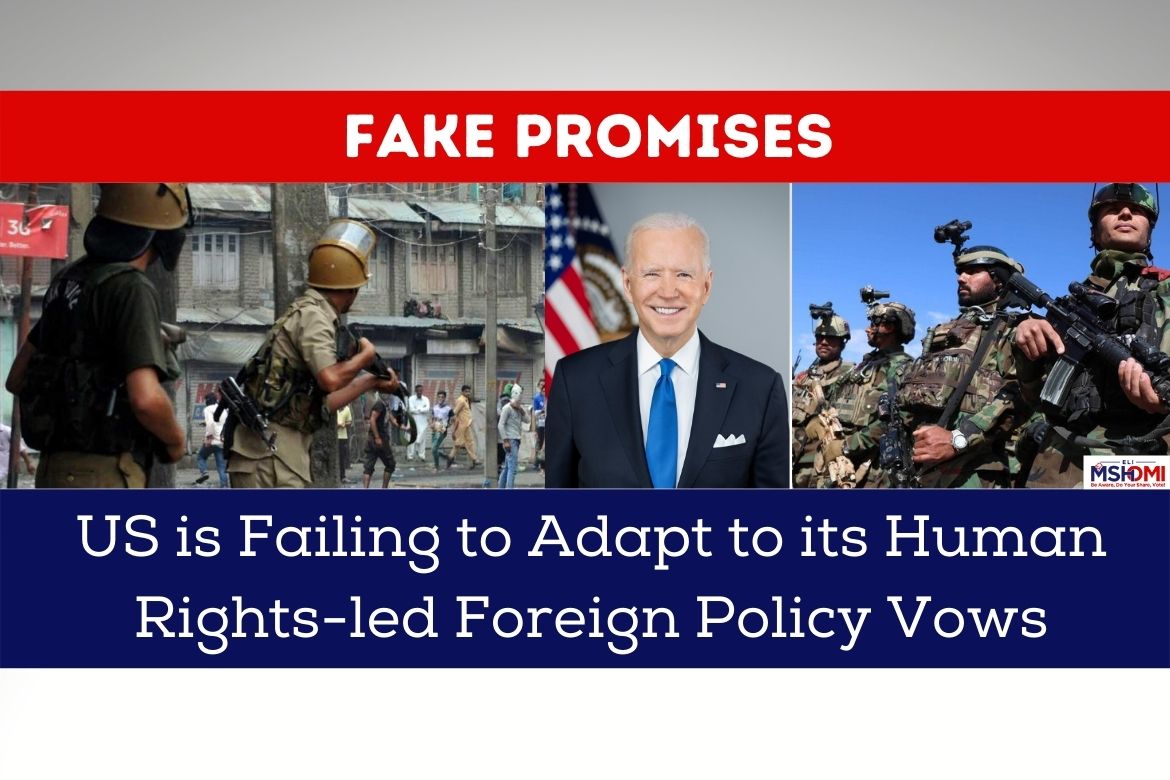 The United States has often tried to champion human rights under multiple administrations, asserting that they make their foreign policy on humanitarian grounds.

President Joe Biden even mentioned this dictum in front of the United Nations during his General Assembly speech.

In these times, however, the US has often failed to live up to expectations as it pledged.

From dropping Afghan people off the planes during the final departure to leaving hundreds of helping hands of America unattended, to supporting the merciless bombing of Palestine by Israel, to not taking meaningful actions against military dictators who have nullified the gains of democracy in Africa, the US often failed to implement the promises it made.

The United Nations issued a report on Indian atrocities in Kashmir in 2019, citing grave human rights violations. Involved in these violations were sexual assault, kidnappings, assassinations, political turmoil, economic suppression, and others.

However, after the passing of more than two years, the US has yet to bring India accountable for the politically motivated crisis.

The stance made sense during Trump’s tenure, who did not put human rights issues at the core of his foreign policy. However, in Biden’s era, the same hypocrisy is being carried out, where the superpower is yet to make any sanction against India.

Various stakeholders and human rights activists chided Indian atrocities in the held Kashmir. However, the Biden administration failed to take any action against India.

In fact, Washington is seeking greater military cooperation with New Delhi, which will ultimately strengthen the Indian army, an organization that is at the epicenter of perpetrating human rights crimes in Indian occupied Kashmir.

Middle East: The Epicenter of US Hypocrisy Regarding Human Rights Crimes

The fact that these slogans are only limited to a verbal approach is evident from the US practices of patronizing Israel time and time again despite the dangerous route it takes against Palestine.

While the recent bombing of the Gaza Strip is the talk of all now, the US has been persistent in encouraging Israel to follow this path.

Even in 2014, under Obama’s tenure, who also regarded human rights as one of the top priorities of its administration, the US did not bring Israel to justice in the war against Gaza.

Although the US is heavily dependent on Israel to carry out its proxy operations in the Middle East, this must not give Israel a walkthrough from the US-led human rights efforts.

In fact, when Biden was a senator, he evinced that the US had to create Israel if there were no Israel, which manifests his ultimate support to the Jewish state.

The human rights crisis in Afghanistan is at an all-time high, where refugees have nowhere to go. The empty promises of the Biden administration failed to materialize the post-withdrawal strategy. While refugees continue facing rejection from one country or another, the US has no clue right now.

Even the Biden administration is facing a tough time issuing visas to many Afghanis who helped the US in its everlasting war.

The misery does not end here, as even a number of American citizens are being stranded in Afghanistan with no sign of coming back.

Bombing Afghani civilians and labeling them ISIS-K was one of the grave errors Biden made after withdrawing from the war-ravaged country.

Condemning families after bombing them using drones has become a new norm for the administration, which manifests that the gap between theory and practice is widespread in Biden’s approach, depicting that the US must course-correct and embrace its own words fully.

Ranging from taking no action against China on Uighur to training military dictators of Africa to help them in administrating coups, the US has failed in various avenues of walking the talk in maintaining its human rights policies.

Following the egoistic-driven realist school of thought in global politics is one of the prevailing practices all over the world. And the United States can also follow that.

But championing human rights only in talk without following it in practice is a falsified approach, which needs to be abandoned in the long run.

Collecting votes based on the liberal and popular agenda of protecting human rights just to abuse the same afterward is counted as hypocrisy, which will only increase the anti-US sentiments all across the globe, which has already been seen in the wake of the US war on terror.