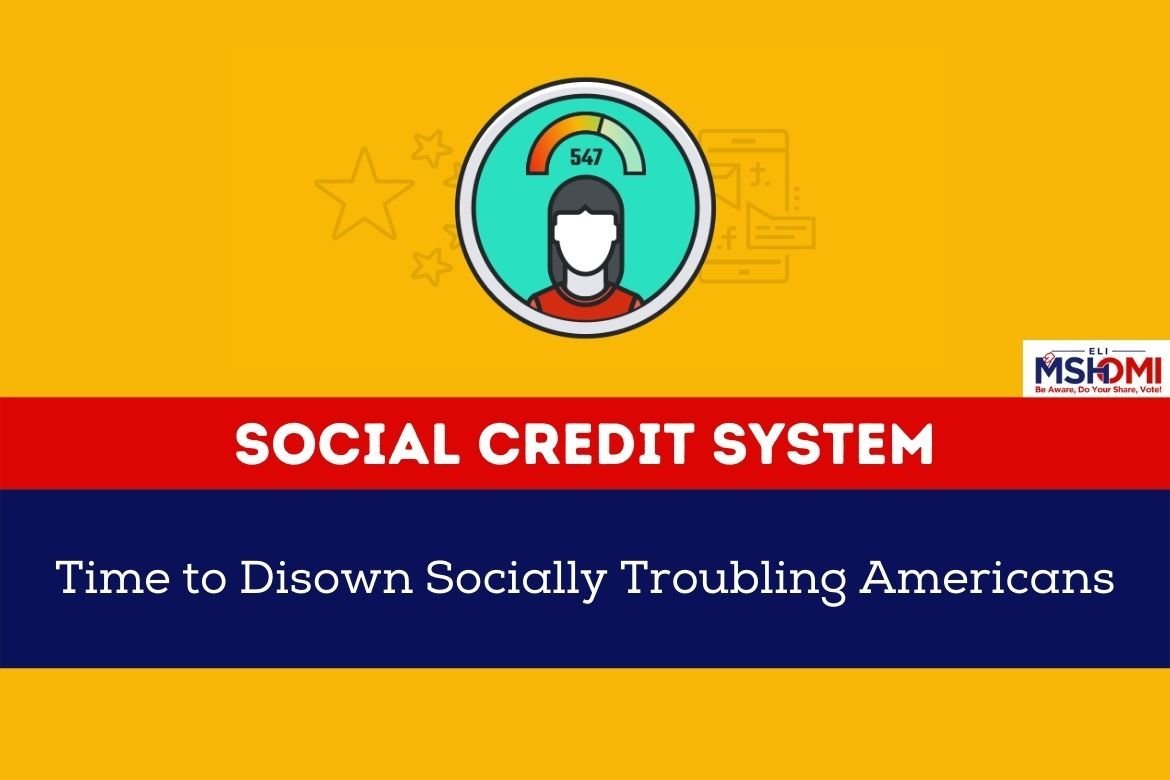 The freedom of expression doctrine has enabled the US citizenry to trespass on others’ rights, which is often depicted in the prevalence of poor social behavior.

However, the upcoming system of social credit can fix things up if it is applied justly.

Social credit, a process to give citizens a numerical “score” about their social behavior, is a concept where a threshold is set, and any individual falling below that line will be isolated from society to a great extent.

Business owners and governments can take severe measures to curb anti-social behavior and withhold services to below-the-threshold users to ensure that people comply with social norms.

The idea, undoubtedly, is exceptional, just like vaccine passports, where unvaccinated people will not be served in public places.

However, the algorithm these systems use must be designed fairly, so it does not become another tool of white supremacy.

It is a system through which government and tech giants will maintain a database to access citizens’ trustworthiness and conformity to social values and norms.

The surging extremism in the United States can be seen in multiple avenues. Be it a mob attacking Capitol Hill, or conspiracy theorists feeding the lies in the minds of the masses; crazy people are making law-abiding citizens suffer.

Tech companies have already started working on the project, as they have kicked off their bid to capture the data of people using their platforms.

Facebook, for instance, recently asked questions of people if their friends were sharing extremist content or not. This way, the platform can judge people and give them social credit scores in order to either own or disown them.

The extent of this crediting system will be broader than anything imaginable. A person with a poor score is expected not to be given the services of Facebook, Twitter, LinkedIn, PayPal, Amazon, Google, Apple, Samsung, or any other brand imaginable.

While a good social credit score is promising to reward individuals, people with poor scores would essentially be sanctioned by society.

They would be unable to enjoy social security services, apply for governmental loans, housing facilities, and every other amenity which is needed to make life easy.

If these services are snatched from a citizen, there are extremely few things to live by. An affected person would also be discredited by the government services and offline businesses, including grocery shopping, etc.

Social Credit System Must Not Become a Tool for Racial Purity

The aim of the program is crystal clear, i.e., to cancel a specific narrative from the society that the ruling party dislikes.

However, this tool can also become an instrument of racism if it is not designed properly. As a matter of fact, a social credit score would be given based on an algorithm that would incorporate many factors in it.

Now the responsibility lies on the shoulders of the government to see data considering all the historical biases. Otherwise, people of color can be misjudged and given a low social credit score.

Social Crediting: Another Instrument for a Political Tussle

The system, however, can also be a path of political tussle, as both parties can enforce people to act in a specific way as per their inherited ideology.

Democrats, for example, would want most Americans to align with left wings by denouncing conservatism. So they would orchestrate the algorithm as per their will.

On the other hand, Republicans can put a halt to the leftists’ practices, increasing the score of people who belongs to the conservative club.

A social credit system is also coming in China. But this is surely not a problem in a communist country, where the country is primarily ruled by only one party.

So they have absolute authority to judge people and give them a social credit score.

If all goes as planned, the social credit system can cut down white supremacy to a great extent while denouncing the socially disturbing people at the same time.

However, as it is a bid to promote leftists, the conservative Supreme Court can also be a stark opposition to it.

Like the two social media giants, Twitter and Facebook, banned Donald Trump in the aftermath of the January 6 episode, many other users would also be blocked from accessing the platforms.

It is about time that these laws are enacted in the United States. The social media companies were already in the doldrums over the rising concerns of lawmakers about extremism on the platforms.

This debate about reforming Section 230 was all about bringing extremist citizens to justice. Now is the time that the social credit system is implemented fairly so that people at the receiving end of all the hate can catch a breath.

The protection of extremely private data of Americans would yet be another challenge for the government, and any data breach could expose the data in front of global hackers.

The critics claim that this is a tactic to endorse the name-and-shame doctrine. Not only this, but critics evince that this is a bid of the government to trespass people’s privacy.

Whether the system will become a success or failure would only be unveiled once it is implemented in full. However, the threat of being exposed in front of the country can help people not to walk the deviant path anymore.