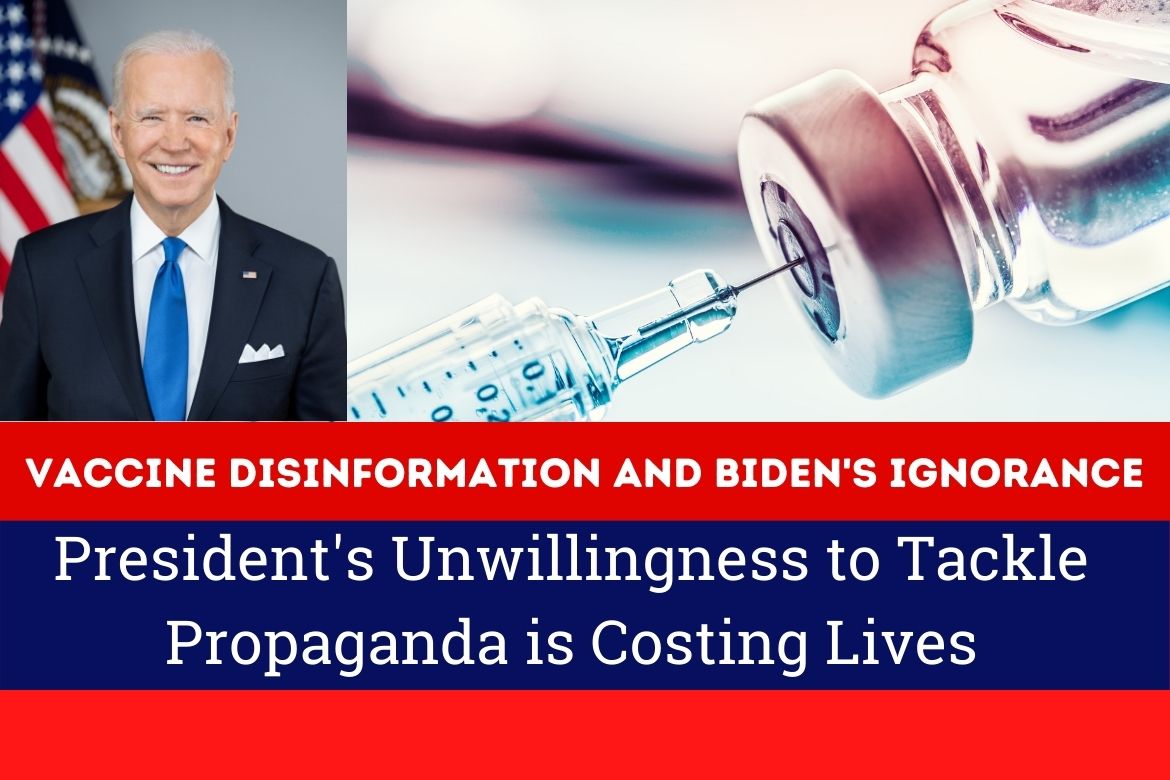 The Democrats are back to their old habit of letting propaganda happen without tackling them.

Facebook became an easy target for President Biden, who said the social media outlet is “killing people,” albeit he softened his tone later on.

This is not the first time that Democrats are paying the price for their leniency against the propaganda.

Be it the Republicans’ allegations against them of police defunding and promoting socialism, democrats believe that if it isn’t true, people would just not believe it. So, they avoid busting the false conspiracies.

Facebook, as expected, did not remain quiet. Instead, they refuted the Biden administration, saying that 85% of Facebook users in the US have been or want to be vaccinated against COVID-19.

As the US fell short of the target of vaccinating 70% of Americans, Facebook censured the administration for putting the blame for the failure on the social media company.

This is an absolute truth that Facebook and other social media giants provide the conspirators a favorable playing field, which helps them in molding the minds of the masses.

However, the Biden administration, being the ruling party in power corridors, needs to take action instead of labeling social media as killers.

According to Biden, the social media giants have failed to squelch the spreading bogus claims, and millions of people are watching that disinformation every day.

He referred to many posts, including one on Facebook in which a doctor claimed that 62% of his vaccinated patients got permanent heart damage.

Then comes the groundless theory that vaccination causes infertility in human beings and that the injections are used to install microchips in human bodies.

White House Press Secretary Jen Psaki and Surgeon General Vivek Murthy also stated that the spread of anti-vaccine posts and vaccination misinformation is one of the biggest hurdles for the authorities in the way to fight COVID-19 and save precious lives.

According to the findings of researchers, anti-vaccine accounts are continuously spreading fake news.

On the top of the list are twelve accounts, which are sharing nearly two-thirds of anti-vaccine misinformation online. Six of those accounts are still posting on YouTube.

Psaki said that the fight against disinformation regarding the vaccine had become the top priority of the Biden administration.

But the situation seems far away from this claim. Political activists and Democrats warned Biden last year to construct a task force to counter vaccine disinformation, but Biden ignored the request completely.

Blair Levin, a former Obama official and top Federal Communications Commission staffer, in an interview, revealed that six months ago, he called on the new administration for the creation of the vaccine disinformation commission.

But, he was not listened to because the focus was on producing vaccines rather than providing accurate information about them.

The officials urged the president to include a misinformation expert in his COVID-19 task force.

The letter also cited a statistic that four out of ten Americans oppose vaccination against the coronavirus.

The steps taken back then could have been proved consequential today, with more and more people getting vaccinated.

The importance of vaccination has increased manifold with the arrival of the concept pandemic of the unvaccinated. However, the lackadaisical campaign of the incumbent administration is making the situation difficult.

An All-Out Assault on Various Platforms can Kill the Disinformation

What the president needs to do is to appoint a commission to launch a counter-campaign against vaccine misinformation.

Based on data and targeted approach, the pro-vaccination ads should be served to the people who are yet to be vaccinated or in the states where vaccination rates are drastically low.

This way, the maximum audience will be reached with a minimum budget.

Through these pages, the administration needs to launch an all-out assault against disinformation by sharing the impacts of the vaccination on the people.

Mr. President has to confess a mistake that he didn’t take precautionary steps on time.

Rather than blaming social media for the spread of disinformation, the government should initiate a campaign through the same social media platforms where the claims spread.

Making vaccine disinformation a punishable crime will help the administration tackle the crisis.

President Biden needs to understand that propaganda is a real thing, and failure to counter that can result in tragic consequences.

In case of police defunding and socialist propaganda against Democrats, their party was at stake; however, this time, the whole country gasps for vaccination drives as the president continues to ignore the vaccine misinformation.