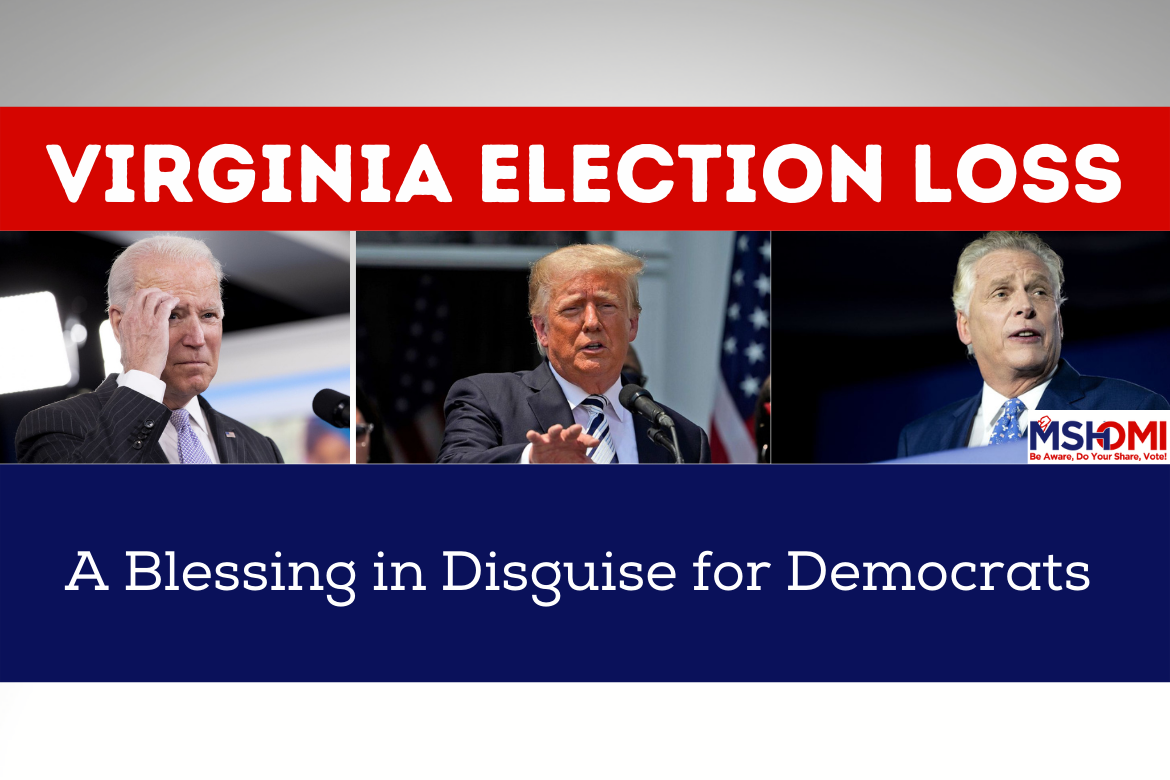 Democrats face a merciless defeat in the Virginia gubernatorial elections, and they might be worried about losing the state they carried easily during the last presidential election.

However, the unfortunate events for Democrats might turn out to be a blessing in disguise, serving as an eye-opener for them.

A defeat in the gubernatorial election should be enough to make them cautious going forward, considering that they still have a handsome amount of time to make a recovery.

Democrats focused their campaign message on “Trump,” thinking that they may get around the former president’s wrongdoings in the elections a year later. However, this did not play well for them.

It is high time for Democrats to set their priorities right and rescue their grassroots strategy if they want to see a difference in the 2022 midterm elections.

While the Democrats overall reputation declined before the elections, mostly due to their inability to pass any bill of Biden’s agenda, various failed campaign tactics helped them lose the elections that Democrats could have avoided even though Biden’s popularity had nosedived at the federal level.

Usually, Democratic candidates in Virginia have had at least five field staffers to strengthen their grassroots efforts and keep contact with the voters at the very basic level.

However, this time only one staffer was placed in many competitive districts that helped Republicans win the elections.

Democrats had a strong grassroots campaign the last time McAuliffe won the election, but reportedly this time, most volunteer recruits were trained during COVID time, resulting in less experience in acting as a field volunteer and contacting voters face to face.

Thus, the inappropriate training of the volunteer force, complemented by the lack of staffing for Democrats, ultimately resulted in the Democrats’ loss.

The Democrats had previously won the 2013 gubernatorial elections in Virginia. Back then, Democrats had more than 200 field staff for GOTC efforts, but as time progressed, the retention rate for those people declined, thus pushing Democrats on the back foot.

All the physical apparatus decayed while people moved on from the campaigns, leaving Democrats unanswerable on many fronts.

Democrats Do not Groom Politicians; Republicans Do

Another vulnerability of the Democrats that helped Republicans clinch the seat was the lack of political support for the not-so-recognizable candidates.

Reportedly, Republicans breed potential politicians right from the very beginning, starting from the school level, and helping them climb up the leader periodically.

Contrary to that, Democrats often fail to promote a candidate who is even second in the race until the final GOTV push.

The case of the Virginia gubernatorial elections tells the same story. The fact that Glenn Youngkin managed to win a seat despite being a political newcomer, defeating the veteran politicians, depicts the diversity of support he enjoyed from Republican ranks.

It is widely believed that future political leaders take time to groom, and if political parties can raise them right from the very start, they are investing in the future of their party.

Nonetheless, as it happened, Democrats need to go back to basics to recalibrate their ground-level efforts if they want to stand a chance in the upcoming elections.

Fixing federal priorities should never be underestimated, and every issue unfolding at the federal level must be addressed to attract voters toward elections, and ignoring field efforts is also like axing one’s own feet.

The polls already indicated that a close race was expected between the two contenders; however, better field efforts could have changed the polls heavily in Democratic favor.

Democrats overall failed to materialize the resources they had for the campaign and went the wrong route to find the victory that they never got.