Trump the Devil: Evangelicals the Conduit 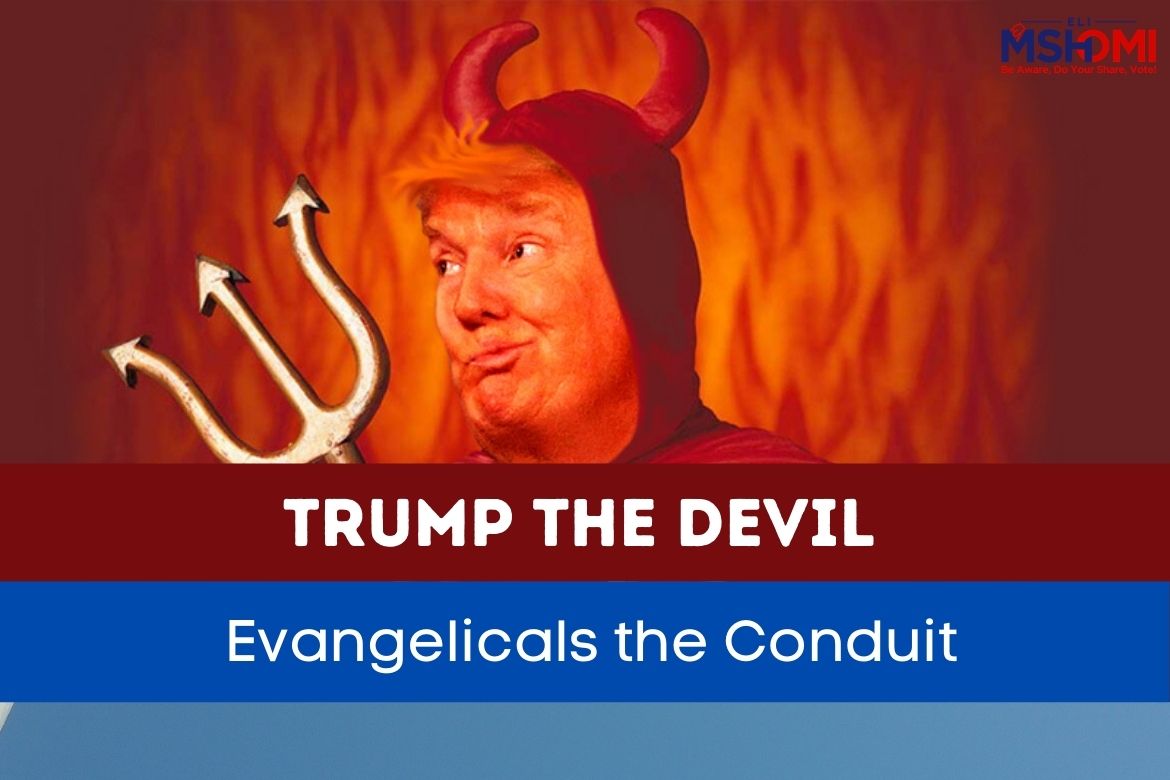 Due to my anti-Trump political views, a white evangelical Christian sent me this message on LinkedIn before the 2020 presidential elections,

“Hi Eli, I really enjoyed working with you in the days of Life USA. I remember you be a Christian with a spark of life. I am going to drop you on LinkedIn. Your strong left political views make me sad and frustrated. I am sorry I need to take the time to be good friends.”

I don’t know whether he dropped me on LinkedIn or not, as I usually neither verify it nor drop others on that platform. However, his remarks made me concerned about the ubiquity of nonsense present in the churches today.

At work, I usually don’t discuss my religious or political views, as doing so is taboo for me, and I believe that it does not have anything to do with me being a Data Engineer.

What he did not know is that I am a theologist too, and it is very likely I know about Christianity more than him.

He is one of those Christians foolishly inspired by false prophets like Robert Jeffress, Franklin Graham, and James Dobson, just to mention the few.

The false prophecies by different white evangelicals on the reelection of Donald Trump have raised more questions than answers about today’s church’s integrity and Christianity as a whole.

Many questions have already emerged, including whether the church today is hearing from God as they claim, or are these just the conspiracy theories that churches in the name of prophecies initiate.

Has the church lost its meaning in modern society? The answer is definitely a big YES.

Any religious organization should serve as the pillar of the truth. Instead of supporting baseless conspiracy theories, they should lead the world in finding the truth. No lie must be tolerated in any religious group.

Religion should act as the light of the world and the shining truth. It should never be influenced by the systems of this world, especially politics.

Capitol Hill Storming: The Emblem of White Evangelicals Stupidity in the US

On the fine morning of January 6, when Congress prepared to certify Joe Biden’s victory, white evangelicals had their own malicious plans.

It was their time to pay back Donald Trump, who never disappointed them. In their hands, they carried posters like “Jesus is my savior” and “In God we Trust.” A man was seen storming Congress Hall with a Bible in hand, another one with a Christian flag.

They believed themselves as the people entitled to save the world from cruelty and injustice. This was no surprise seeing the developing pattern in the wake of the presidential elections, as white evangelical churches claimed that the elections were stolen from Donald Trump, and the Christians’ liberties were being curtailed to a great extent.

That the churches were forced to close in the wake of the pandemic was also one of their concerns.

For some of them, this was just the political nonsense, while, for the majority, this was the only reason to live.

This insurrection, driven in the name of Jesus, was certainly the last thing that a rational mind could expect. The militant wing of the white evangelicals idealizes Trump, which is so dangerous that they could respond to his calls even in the future.

Will these very same people back Trump or not if he makes a comeback in the 2024 election? It is certainly too early to answer this question now.

However, the white evangelical church has surely made a deal with the devil, and they are likely to exploit the situation moving forward.

Right now, the white evangelicals have found it hard to distance themselves from the events that recently happened at the Capitol.

The events that unfolded at the Capitol showed a miserable state of white supremacy in the church, a fact that no one can deny. Donald Trump: A Devil who used White Evangelicals for his own purposes

Dominating Evangelical Thoughts in Modern Churches: A Sign to Worry

The demise of the presidential tenure of Donald Trump might be perceived as a bad dream by the white evangelicals Christians.

However, the prevalence of pro-Trump doctrine in today’s church evinces that Donald Trump has left undeniable marks on the modern churches despite having only a one-term presidency.

Keeping him in power was the only ambition of the white evangelicals, as nearly 76% of them voted for Trump in the 2020 presidential elections.

Although they failed to bring him to the White House again, these extraordinary numbers proved the notion of the pro-Trump narrative of the white evangelicals Christians.

A man who separated parents from their children on the Southern border, went against science in tackling the coronavirus crisis to satisfy his ego, and promoted racism in the United States is a dangerous precedent for the country. Yet, a country dominated by white Christians supported him in many ways.

Perhaps Donald Trump realized sooner than needed that white evangelicals are the people who he can exploit, so he capitalized on them as much as possible.

It is true that this love of white evangelicals and Donald Trump is not one-sided. While these people’s continuous support of Donald Trump extended their agenda in the United States, he appointed three conservative judges to the US Supreme Court during his tenure. He also appointed more than 200 federal judges, most of whom were conservatives.

The anti-abortion narrative and other conservative voices in the United States in recent years are an apparent example of white evangelical thoughts dominating the country.

Most of the churches are extremely vocal about their support of Donald Trump. For many, Donald Trump was the white evangelicals’ best friend in the White House since the inception of the United States. Brian Gibson: One of the many pastors who favored Trump in the wake of January 6

One such message from Brian Gibson, the pastor of a well-renowned church, said while criticizing Donald Trump’s social media banning,

The very notion among today’s churches that Donald Trump is the savior of Christianity adds fuel to the fire in the prevailing situation.

Whether this situation will heal with the passage of time amid Donald Trump’s absence from the national spectrum is an unanswerable question.

A religion should shun evil instead of sponsoring it, and that should especially raise the alert on evils purported by political powers.

A religion that needs political power to thrive is not a religion but just a cult, and that is the state of the church today.

The truth shall prevail in the churches, without any political biases, or else the churches will cease to exist amid modern times.

Political Realignment in the US: A Sign of Utmost Worry for Biden

COVAX: WHO Vaccination Initiative in Jeopardy as India Gasps for Oxygen