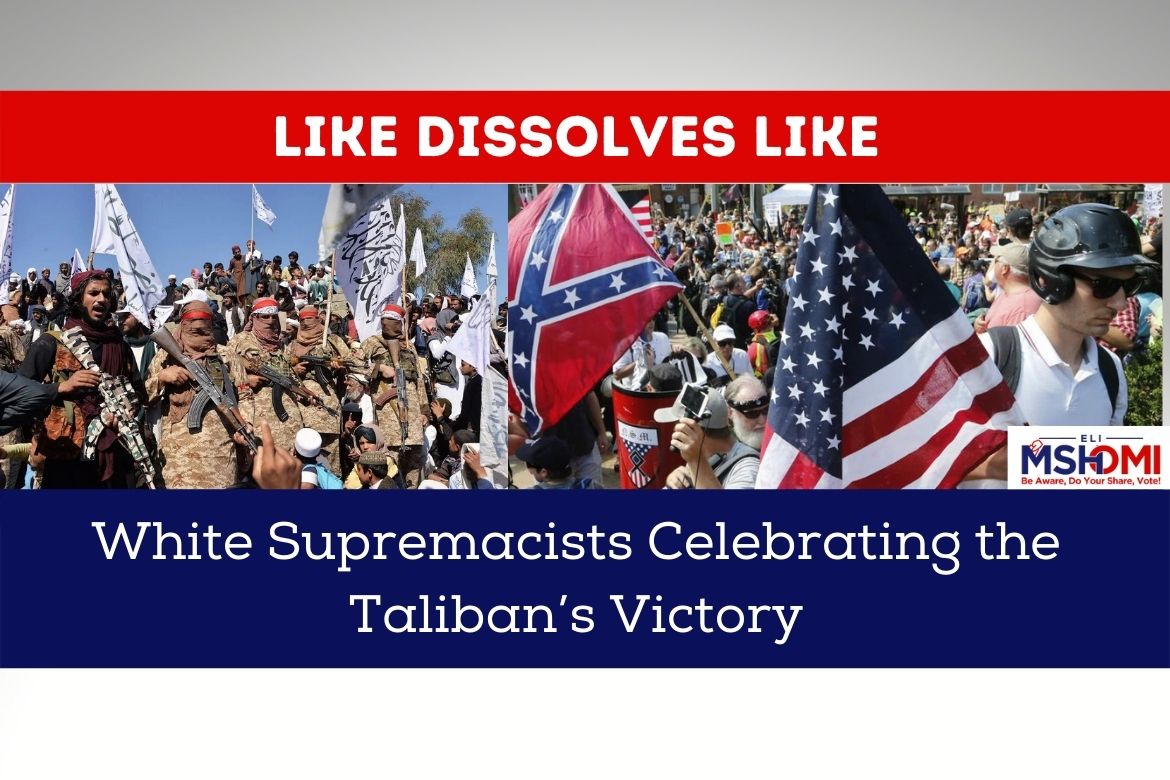 The swift conquest by the Taliban has impacted the whole world. The reseizing of the entirety of Afghanistan by the Taliban within a few weeks has not only provided optimism to Jihadist groups but the ethnic and extremist groups of the western nations also.

While the human rights advocates mourn the Taliban’s advancement, white supremacists are celebrating it as if they wished for it all along.

Various white supremacist groups, neo-Nazi, and anti-Semitic groups have been praising and celebrating the conquests by the Taliban, showing their sentiments with the help of memes, pictures, and quotes.

Therefore, once again, these rising trends have put the local law enforcement agencies in an unprecedented situation. Taliban: Not a Group but an Ideology Shared by the Likes of White Supremacists

According to the stats of the Federal Bureau of Investigation (FBI), every year, the rate of hate crimes is reaching a new record.

In 2020, more than 4000 people, especially Black Americans and immigrants, faced acts of intimidation. That ratio has risen 6% up until the middle part of the current year.

People are sharing hate posts while commenting on different hate groups against minorities and praising the Taliban’s principles and the nature of their rule.

In recent months, the Telegram channels moderated by far-right extremist groups have been sharing and provoking folks to initiate an armed struggle against the government and reinstate Trump’s government.

The recent analysis revealed by SITE Intelligence Group, a non-governmental organization that works on and follows the activities of Jihadi groups and ethnic extremists, has also issued warnings for federal law enforcement agencies.

According to the reports, the far-right groups have been proactively promoting hate posts and comments in different social media groups showing the Taliban’s takeover as a lesson of love for the homeland, for religion, and freedom.

The SITE shared many of those posts out of hundreds that show intimidation and hate toward government, minorities, and immigrants.

For example; in a post by a Telegram channel Proud Boys, a teenager posted that If the Taliban, with such a small number of men, arms, and equipment, can defeat the United States and the 300,000 army personnel of the Afghan regime, why can’t white people oust the current government and install their own laws.

There are hundreds of such hate and psychotic posts that are being shared on these groups daily. And shockingly, most of the readers have also been showing their willingness and support to such posts and narratives in the recent months, the SITE found.

In another post, a popular white supremacist and Trump supporter narrated that it’s hard not to laud the Taliban over their takeover.

After they were evicted from power, what did they do to survive and became even more powerful and strategic? They should also adopt the same strategy to free America from the hands of aliens.

These recent surges in hate speeches and campaigns indicate the possibilities of incidents like the January 6 event or the Christchurch massacre. But this time, it seems that immigrants, particularly Afghans, are the main target of these extremist groups.

White Supremacists Support of the Taliban: Agencies Have Got a Job to Do

The law enforcement and intelligence agencies have been monitoring the recent surge in rhetoric statements. Federal agencies are most concerned regarding the increase of hate and criminal abstraction.

The core idea of the white supremacist ideology is “the great replacement,” the faith that the population of the white race will be extinct as a result of continuous immigration, which is statistically untrue.

Recently, during the issuance of the National Terrorism Advisory System, the secretary of the Department of Homeland Security, Alejandro Mayorkas, said that a conspiracy theory is taking root between the extremist groups that the influx of immigrants to the United States will result in the loss of the authority and power by white Americans in the country.

Therefore, they think that intimidating or using arms against immigrants and minorities is the best option to suppress them, which is the primary reason for the ignition of violence in the country.

The far-right groups will reap massive benefits of the US’s hasty withdrawal of Afghanistan to foster their own agenda.

This situation can predominantly change the mind of common Americans or those who have a soft corner for the white supremacists but have been hiding their true intentions.

In research on the interaction between Jihadis and white supremacists by GNET, the researcher Meili Criezis revealed that both extremist sections have major similarities.

For this purpose, the groups in America can adopt any inhuman approach. The only problem they are facing right now is that, unlike Afghanistan, American has a much better institutional hierarchy and a proper political system that could hinder them from inciting violence.

After the outbreak of fake news regarding vaccines on Facebook and Twitter, the white extremist groups and neo-Nazi groups have also initiated spreading their hate speeches on social media platforms.

They have been sharing the old narratives of Trump and his associates, in which they had praised the Taliban and declared them a better regime than Democrats.

A block linked to the neo-Nazi terrorist organization,  Atomwaffen Division, and the National Socialist Order (NSO) has also anonymously shared posts in which they have threatened immigrants and have demanded the government not to relocate Afghan citizens into the United States.

According to senior officials of the FBI, the department has arrested a couple of individuals in relation to the group. However, the people behind the recent posts are still out of the reach of the agencies but soon will be caught.

After the reports and recent surge in hate speeches on social media, federal agencies have been proactively working on the matter.

According to critics, the new wave of unrest in the country shows that these extremist groups might be planning or intending to hold a vast engagement against the immigrants or pain points of the government to negatively affect both people and government equally.

There is no doubt the extremist groups are happy about the Taliban takeover of Afghanistan because it is certainly the validation of their ideology. By using the Taliban card, now they can pursue their own agenda in the United States.

This is surely a dangerous ideology and demands the urgent attention of all the stakeholders so that this insurgency can be stopped.