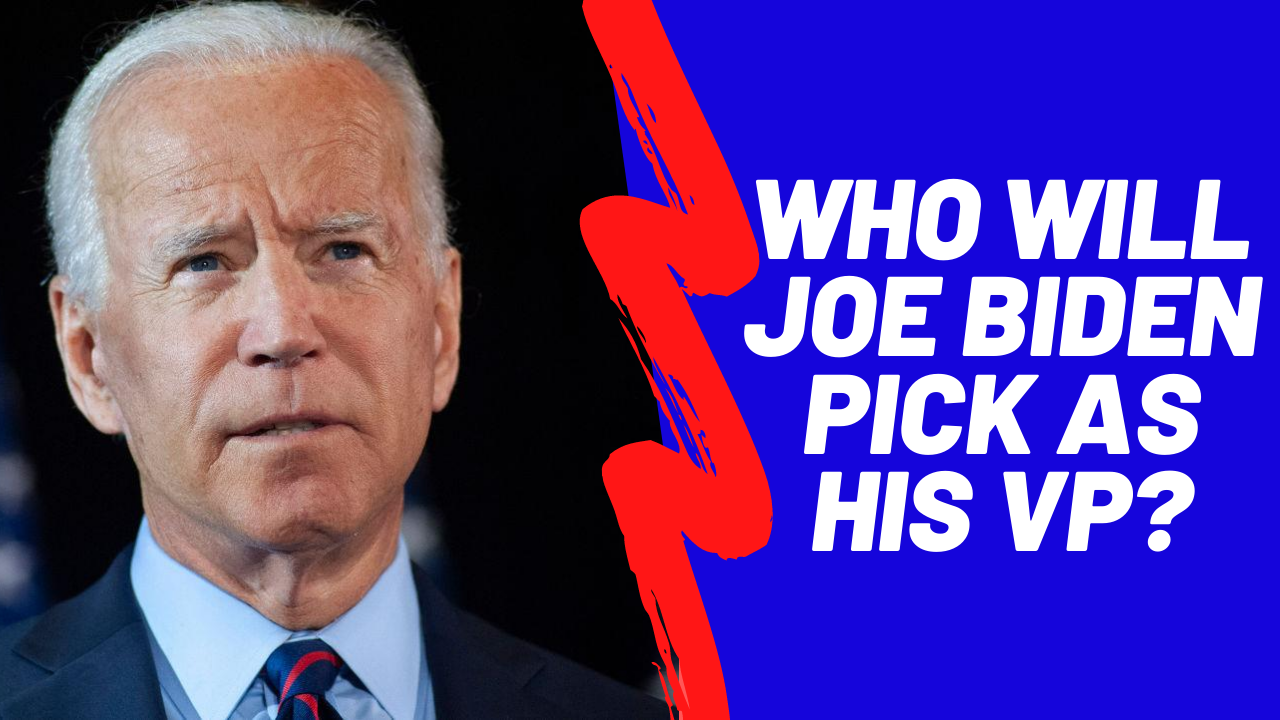 We believe many of you are very interested to know who will be Joe Biden pick as his VP. We have discussed here to guess who is the person.

Overview of Joe Biden Pick as His VP

Unlike most VP picks, Joe Biden‘s choice of this election cycle matters. Usually, the name of the game is to pick someone from a swing state that will not be detrimental to the campaign in any way.

While Biden needs to make sure he does not go too far to the left in choosing a VP, he needs to choose someone that can excite the Democratic base. Polls show that Democrats are not enthusiastic about voting for Joe Biden.

Indeed, Democrats are chomping at the bit to vote against Donald Trump, but not for Joe Biden. Biden needs to a couple that extreme anti-Trump sentiment with enthusiasm for a Biden administration to put him over the top and gain support once he takes the Oval Office.

Earlier this week on MSNBC, Biden once again affirmed his previous statements that he would be picking a woman of color for the VP spot, telling Joy Reid his campaign had narrowed it down to “four Black women.

“While it is not certain who those four Black women could be, I am going to take a stab at ﬁguring out who they are and what each of them could do to help—or hurt —the Biden campaign.

Early in the presidential primary season for the presidential election, many political pundits believed that Sen. Harris had what it took to go all the way and capture the nomination. She even had a couple of signiﬁcant spars with Joe Biden on the debate stage on the topics of race.

She said it was “hurtful” that Biden had worked with two segregationist lawmakers during his time in Congress, and attacked his voting record on busing.

“There was a little girl in California, who was part of the second class to integrate her public schools, and she was bused to school every day, and that little girl was me,” Harris said at one of the primary debates held in June of 2019.

Despite their past, Kamala Harris has consistently been one of the top bets for Biden’s VP pick. Although some might say that is due to high name recognition.

The young and telegenic Harris is viewed by many as a moderate. She has had much government experience at both the state and federal level, having served as California’s attorney general before being elected to the U.S. Senate.

Unlike some of the other names being ﬂoated around, Sen. Harris has real experience and would undoubtedly be ready to take over the White House in case of an emergency.

There are certainly cons to picking Harris, and many have to do, ironically, with her experience —namely, her time as California Attorney General. While she was attorney general, Harris took a hard line on crime and policing.

Law professor Lara Bazelon said Harris “weaponized technicalities” as attorney general to uphold lengthy sentences. There are reports she also blocked evidence that could have saved a man from being executed.

“She’s a cop,” was the sentiment from a Democrat voter. Moreover, in this day and age, that is not a good thing if you are a Democrat running for office.

Setting her history as a police chief aside for a moment, Rep. Demings could help Biden sway voters in the ever-important state of Florida. In 2016, President DonaldTrump was able to pull out a victory in Florida, beating Hillary Clinton by 1.2 percent.

Could the presence of a Florida native ﬂip the twenty-nine Electoral College votes in Biden’s favor?

Despite the prospect of Demings ﬂipping Florida, there is a signiﬁcant risk in picking her. Because she was once Orlando’s police chief, many on the left would immediately label her as a creature of the “systemically racist” system.

Lawanna Gelzer, an Orlando-based community activist, said she “never saw any changes in policies when Demings was police chief]. I never found anything to bridge the strain between policing in the community. I saw the over-policing. The same patterns continued during [her] administration that we’re still dealing with in Orlando today.”

As with Sen. Harris, her background in the criminal justice system discredits her in many radical leftist eyes.

Atlanta Mayor Keisha Lance Bottoms burst onto the political scene following the protests and riots that rocked her city after George Floyd’s death.

Many described her leadership as “forceful-yet-sympathetic” throughout the riots that rocked Atlanta. Joe Biden himself heaped high praise on Mayor Bottoms, saying, “You have been incredible. I’ve watched you like millions, and millions of Americans have on television as of late. Your passion, your composure, your balance has been incredible.”

She has also had her moments on cable news playing the attack dog and going after President Trump. “He should just stop talking. This is like Charlottesville all over again. He speaks, and he makes things worse.”

Mayor Bottoms seems to be free of much of the baggage weighing down Sen. Harris and Rep. Demings.

But, some people would question her amount of experience and whether or not she can take on the job of president in the case of an emergency.

All around, however, Mayor Bottoms seems like a solid pick with excellent upside and little downside.

“There is a big buzz at the Loudermilk Conference Center in downtown Atlanta as a gathering called Paradigm Shift 2.0: Black Women Confronting HIV, Health, and Social Justice get underway.

The hype has been building exponentially for lunchtime guest speaker Stacey Abrams. When she is ﬁnally introduced the women shout and leap to their feet.

Young women stand on chairs, camera phones ﬂash. Abrams, who appears both amused and slightly disturbed by the fuss over her, takes control of the chaotic scene. Pandemonium ensues as she walks to the far left of the stage, like a runway supermodel, stops on a dime, poses, tilts her head slightly and smiles.

That was the way the Washington Post described an event at which Stacey Abrams spoke. It’s ﬂattering, almost poetic. It certainly appears Stacey Abrams has the endorsement of the WaPo for VP, but what does she bring to Biden’s ticket?

Stacey Abrams rose to prominence during Georgia’s race for governor in 2018, in which she ultimately lost to Brian Kemp. She didn’t take the defeat lying down amid claims of voter fraud and has to this day never conceded defeat. Following the election, she founded Fair Fight 2020, an organization to assist Democrats in pushing for voter protection.

Abrams became the ﬁrst African-American woman to be nominated as the gubernatorial candidate from a major party and the ﬁrst non-office-holding person to deliver the SOTU response in 2019. She is seen by many as the brightest rising star in the Democratic Party.

Choosing her would be fodder for the Trump campaign, however, given her sometimes far-left tendencies. She is also woefully inexperienced and would be unprepared to take office in case of an emergency. Her only political experience is in the Georgia General Assembly.

While Stacey Abrams might excite Bernie Sanders-type voters, practically she is not the best choice.